She Was Busy Building a Retail Chain 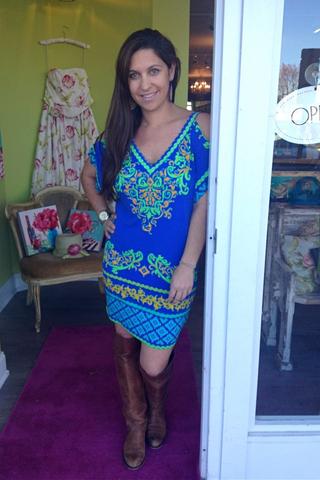 The first time Lisa Kornstein went to market in Atlanta, she was completely overwhelmed. She stood on the escalator and looked through the atrium at the endless floors filled with thousands of showrooms. She wanted to throw up.

“I had absolutely no clue what I was doing the first time I went to market,” Kornstein said in a phone interview. “I didn’t know where to start or what floor to go to. I figured it out on my own. I said, ‘Well, I’m just going to buy what I like.’ That’s the key to selling. If you love it, you can sell it.”

Kornstein is the founder of Scout & Molly’s, a Raleigh, N.C.-based fashion boutique that just started franchising. She started her company when she was 26 years old with no formal experience in fashion. Since then she’s grown the boutique into a profitable business with the goal of creating a national brand. Along the way, Kornstein dealt with hurdles familiar to many entrepreneurs — marketing, location, buying — but she also suffered from multiple sclerosis, an illness she was diagnosed with in 2008. But she refused to let that stop her. And now she has her eyes set on having 100 Scout & Molly’s stores around the country in five years.

Kornstein’s idea to open a clothing boutique came to her while she was studying for her master’s at the University of South Carolina. She never had much interest in fashion growing up (she calls herself a tom boy back then), but she used to jog by a boutique in South Carolina with her dogs, Scout and Molly. The owner of the boutique would come out and talk with her and pet her dogs, and Kornstein appreciated how nice it was to feel comfortable around a boutique — a place that could be intimidating for a non-fashion expert.

After grad school, Kornstein moved back to the Raleigh area and started working for a staffing company — a job she didn’t love. She kept talking about opening her own business and after receiving encouragement from family, she quit her job and started working on a business plan. She received free business counseling from North Carolina’s Small Business and Technology Development Center, and after three and a half months of preparation, she opened Scout & Molly’s in the spring of 2002 with $100,000 ($20,000 from savings and $80,000 in a loan from the SBA).

She describes the style of the store as “contemporary women’s fashion” and stocks it with over 200 designer brands — all items she would like to wear herself as a mom of two kids.

“I like to look good, but I also like to be comfortable,” Kornstein said. “It can range from a hoodie to a cocktail dress. I like to wear things that are versatile.”

The store was popular from the get-go. She started with $25,000 of inventory (wholesale), and she was profitable in her first year.

Kornstein did everything herself the first year the store was open, and she didn’t hire a store manager until year three. She had her hand in every part of the business, and the store continued to grow under her watch.

But in 2008, Kornstein was faced with a life-changing diagnosis. She had multiple sclerosis, an unpredictable illness that would change how she went about business.

“In the beginning, I was really scared,” Kornstein said. “I had always relied on myself to do everything. I needed to delegate. [MS] is so unpredictable. There’s no set course. You don’t know when you’re going to be sick. You’ll be fine one day, and the next day, you can’t get out of bed. When I got diagnosed, it forced me to take my foot off the gas.”

At that point, Kornstein hired extra help so her business could continue to grow. She brought in a full-time store manager, someone to help with the accounting and books and was able to get clothing reps to come to her so she wouldn’t have to make the trip to market. She set an operational plan in place and trusted others to run the business, and it paid off.

The store continued to thrive, and she even started hearing requests from customers who wanted to open their own Scout & Molly’s stores. In 2008, Kornstein signed a licensing agreement that allowed another entrepreneur to open a Scout & Molly’s in Charlotte, N.C.

Then, a year ago, Kornstein partnered with FranLogic to franchise and grow the brand. FranLogic invested money and resources into the brand and Kornstein says they now plan to open more than 20 Scout & Molly’s stores in the next year. There are currently franchises in places like Columbia, S.C., and Cary, N.C., and stores will open soon in Philadelphia, Houston and Boca Raton.

The stores will all have a similar look and feel and will be decorated in their signature Benjamin Moore Pear Green. Kornstein says she would like Scout & Molly’s to become a national brand but for each location to feel like an independently owned store — not one link in a chain. E-commerce is also in the pipeline, but right now the company is focusing on franchising.

In the process, Kornstein’s role has shifted from owner to chief operating officer. She doesn’t spend as much time in the stores anymore. Instead, she’s busy meeting with potential franchisors, training employees, buying clothes at market and appearing at grand openings.

“My love of sales has not changed,” Kornstein said. “Now I’m working on selling franchises instead of on the sales floor. Seeing something that was my vision — my baby — has turned into something that is becoming someone else’s baby.”